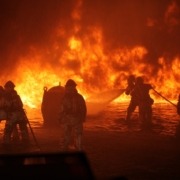 When Pacific Gas and Energy (PGE) was determined to be responsible for the devastating Camp fire that killed at least 86 people and resulted in tens of billions in damage, they filed for bankruptcy and changed their tactics. The public outrage over their recent CEO bonuses, lobbying, and political investments rather than fixing old and accident-prone infrastructure, was swift and accurate.

That was last year. Today as I write this in the dark at home, 185,000 people are being evacuated just north of San Francisco, and PGE has shut off electrical power to 1.3 million people. Potentially historic winds and low humidity at the end of a dry summer can develop almost any spark into a life-threatening fire that can spread faster than you can run. PGE has calculated that dealing with the public and political outrage, and plummeting stock, is cheaper than being responsible for another catastrophic fire.

The implications of shutting off power to cities and counties should not be glossed over. County hospitals and health care facilities are running on backup generators and are scrambling to ensure they can maintain diesel supplies. Public utilities that provide water and sewage are trying to calculate how long their drinking water reservoirs will last before running out. These are serious times, and as Gov. Newsom said: “I could sugar coat this, but I will not. The next 72 hours are going to be challenging.”

For the first time, many Californians are being confronted with the reality of making everyday decisions without electricity. Fundamental realizations are developing as people negotiate the basic questions of their livelihood. Will water still run from our faucets and will the toilets flush (yes, for now)? How long will the food stay safe to eat in my refrigerator (place cold ice in there to help it keep cool longer)? I have a solar system so I’ll have electricity (not likely, they are designed to turn off when the grid goes down).

In my neighborhood, after we lost power and my wifi network went down, my landline was useless and I could no longer send or receive text messages because the local cellular towers were also not being powered. People around me could not make emergency calls if they needed to, and how were we going to receive evacuation notices and updates about potential new fires in their areas? Needless to say, this is an unexpected predicament for most, and an extremely dangerous situation at the least.

We will eventually come to the end of this ever-growing fire season. Houses and infrastructure will likely be rebuilt, the power will be restored, people will go home and forget to execute on the ideas they had to ensure their safety in future emergencies. In addition to the grief thousands will endure, rage will boil, blame will fall on PGE, and calls for accountability will flow through the veins of public discourse.

Here is the thing—there is no doubt California will experience catastrophic fires again and we can be certain millions will be without power for days if not weeks in the coming future. There are over a 149 million dead trees as a result of years of drought, heat, and beetle infestation. 18 million died last year alone, and these trees could be match sticks for a careless person, lightning strike, or wind storm that topples a utility power line. Housing developments will continue to expand into fire prone areas. Yearly averaged temperatures will continue to climb upwards, and droughts will likely become more severe.

Furthermore, PGE operates 106,681 circuit miles of electrical distribution lines and 18,466 miles of interconnected transmission lines. Anyone expecting one of the largest utility companies in the United States to overhaul their aging infrastructure better not hold their breath, especially since PGE has already filed for bankruptcy. It is time for us to take a hard look at this truth in the face. The probability that we will tackle enough of these issues—climate change, infrastructure, land use policies—in a meaningful way, is low.

Reactionary preparations set in hours leading up to the power shutoffs are not enough. I visited Target, Best Buy and Home Depot to find they were all sold out of small cell phone battery packs, flashlights and people were trickling in to mill through the empty sections. At best, these products will help people maintain an extra day or two of cellphone and flashlight power before they need to be replaced or recharged. Thankfully, most people are still able to drive to packed café to charge their devices, and order takeout food.

Within hours of the shutoff, local gas stations and grocery stores were drained of their ice, batteries, and booze. In my neighborhood, Safeway was letting people shop in a dark store, one at a time, and accompanied by staff, and were not accepting credit cards. How many people actually have the recommended 2 gallons of water per day per person stored? Do people have extra cash, medical prescriptions, a first aid kits that is the base line of preparation? There are plenty of psychological barriers such as discounting the future, that make it hard to really prepare. My sense is people treat their resilience like their earthquake kits—something to knock off the to-do list. And we need so much more.

Non-government organizations, journalists, philanthropists, churches, and motivated citizens are starting to work on these difficult questions. It is time for us to start focusing on what we as individuals, families, and communities can do to increase our resilience and abilities to cope with a challenging future, especially one with limited resources.

Over my battery powered AM/FM radio, I just heard that the winds are expected to pick up, and a “red flag” warning was just issued over the next few days. It seems likely our power will be off for an extended period of time, and more evacuations were announced. My computer batteries are running low, and it is time to drive somewhere to purchase more ice, if I can find any, and connect to a network to let my family know I am okay.